The Rev. Dr. Titus Presler's ministry commitments in pastoring, leading and teaching have been exercised in diverse congregations in the Episcopal Church and abroad and in several seminaries where church leaders are formed. Currently he is engaged in writing projects, is Interim Pastor of the Church of St. Simon the Cyrenian in New Rochelle, N.Y., and serves as a consultant to Continuing Indaba, the Listening Process of the Anglican Communion.

Canon Presler has nineteen years of fulltime parish experience. During his rectorship of St. Peter’s Church in Cambridge, Massachusetts, 1991-2002, the previously declining inner-city parish became a diverse and substantial congregation dynamically engaged in mission in its urban community and the wider world. Particular initiatives included Bible study and prayer groups, after-school ministry for inner-city children, English for Speakers of Other Languages for recent immigrants, a social justice outreach, hands-on engagement with the Anglican Communion, and a strategic plan supported by a capital campaign that preserved the church building. St. Peter's sponsored a number of people for ordination who are now innovative clergy in the diocese.

Presler was Rector of the Bonda Church District in the Diocese of Manicaland, 1983-86, where healing and reconciliation were vital in the wake of the Liberation Struggle that brought majority rule to Zimbabwe in 1980. Extensive pastoral and preaching ministry in Shona was effective in the renewal of community spiritual life. His responsibility grew from five to 12 congregations, which included several new and revived groups. He initiated the Bonda Lay Training Institute, which annually strengthened about 60 leaders, and it grew to become the diocesan lay education program. Presler also has experience in India, where he spent 18 years in a mission family.

Presler began parish ministry as Curate, Associate Rector, then Interim Rector of Christ Church in suburban Hamilton, Massachusetts, 1979-83, at that time the third-largest parish in the Diocese of Massachusetts. During doctoral work at Boston University after returning from Africa, he assisted at Christ Church, Cambridge, and All Saints', Belmont, and was Interim Rector of St. Chrysostom's, Quincy. He is currently non-stipendiary Priest Associate at Grace Church/La Gracia, White Plains. He authored Alert for Signs, Forward Movement's Advent 2007 devotional booklet for people in congregations, and "Leader as Catalyst: Eleven Principles of Christian Leadership," in Vestry Resource Guide (Episcopal Church Foundation, 2004).

Presler was Sub-Dean and Vice President for Academic Affairs at General Theological Seminary in New York City from 2005 to 2009, when the seminary's financial crisis led to fulltime academic leadership being discontinued. Presler enhanced communication among faculty, students and staff, reinvigorated consultative groups, initiated a broad-based curriculum review, expanded course offerings, made academic programs more accessible to evening students, and, as Professor of Mission and World Christianity, established a program in global scholarship and engagement. He organized two major conferences at the Desmond Tutu Center: "Reconciliation at the Roundtable: God's Call in the 21st Century," which opened the center in September 2007; and "An Anglican Covenant: Divisive or Reconciling?" in April 2008.

As Dean and President of the Seminary of the Southwest in Austin, Texas, 2002-05, Presler focused on spirituality, leadership and mission in the seminary's life. Global awareness, a Hispanic ministry concentration, a detailed strategic plan, completion of a capital campaign, and renewed collaboration with dioceses of Province VII were highlights of his ministry. Several new professors were called, and a comprehensive faculty handbook and new bylaws were put in place. The first part of a building program was completed, and a long dormant campaign to fund a preaching professorship was revived and later completed.

A five-time deputy to General Convention, 1997-2000, Presler authored numerous resolutions related to Jubilee 2000 and world mission. He has served on Executive Council, and he chaired the Standing Commission on World Mission, editing the group's vision statement, Companions in Transformation: The Episcopal Church's Mission in a New Century (Morehouse, 2003). He chaired the planning group whose widely collaborative work resulted in General Convention endorsing establishment of the Episcopal Partnership for Global Mission in 2000. In the Diocese of Massachusetts, he co-chaired the Volunteers for Mission Committee, which sent over 75 missioners abroad in the 1990s.

As a scholar, Presler specializes in mission theology and the interaction of gospel and culture, the latter with special reference to Africa. In addition to numerous articles, Presler is the author of Horizons in Mission in the New Church’s Teaching Series (Cowley, 2001) and Transfigured Night: Mission and Culture in Zimbabwe’s Vigil Movement (University of South Africa Press, 1999). A researcher with the Global Anglicanism Project, he co-authored its pilot project report The Vitality and Promise of Being Anglican (Episcopal Church Foundation, 2005). His next book, under contract with Church Publishing, will be Going Global with God: Congregations and Companions in a World of Difference. In 2008 he was appointed Honorary Canon Theologian by Bp. Nathan Baxter and the Chapter of St. Stephen's Cathedral, Harrisburg, in the Diocese of Central Pennsylvania. He maintains the blog Titus On Mission.

Presler is married to the Rev. Canon Jane Butterfield, Priest-in-Charge of Grace Church, White Plains, N.Y., and former Mission Personnel Officer of the Episcopal Church. They have four grown children.

Presler was ordained deacon in 1979 in the Diocese of Massachusetts by Bp. John Coburn and priest in 1980 by the late Bp. Ben Arnold. He has been canonically resident in the Diocese of Texas since going to the Seminary of the Southwest in 2002.

Presler holds a Th.D. degree in mission and New Testament from Boston University (1995), an M.Div. from General (1979), and an A.B. cum laude in philosophy from Harvard (1972). He taught mission previously at General as a visiting professor; preaching at Harvard Divinity School; and African mission initiatives at Gaul Theological College in Harare, Zimbabwe. From 1990 to 1997 he helped establish and taught in the Anglican, Global and Ecumenical Studies program at the Episcopal Divinity School. He was previously a Merrill Fellow at Harvard Divinity School (1986) and a Procter Fellow at EDS (1987). He holds honorary Doctor of Divinity degrees from Seabury-Western Theological Seminary (2005) and from General (2003). 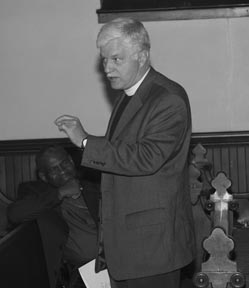 Canon Presler talks about the 2008 Lambeth Conference with clergy and lay leaders of the Diocese of Central Pennsylvania gathered by their bishop, the Rt. Rev. Nathan Baxter (left). Photo by David Shively